It’s a pretty big book. We’re talking about 1,500 pages, a book in three volumes. That’s your Power of Three right there.

And in this video, we’ll explore the opening paragraph and learn several lessons.

I will not talk about the introduction because there’s an introductory part in this book.

We will go straight to the subject matter which is the Anatomy of Melancholy, and we’re going to see how the opening paragraph is constructed.

And we’re going to learn several lessons, including the lesson on:

So let’s jump right in…

Here’s our first paragraph of this book.

Now, it’s a wonderful, wonderful paragraph and let’s take a look at how it is constructed. In fact, I’ll tell you right now – it is pretty much one sentence. It is the opening paragraph, but it is one sentence.

Lesson 1: A sentence must have a subject and a verb because otherwise it is a sentence fragment.

This one is a sentence. In fact, it is a very beautiful and powerful sentence.

But let’s see how it is constructed and if we can spot the subject and the verb here.

“Man…” Now, this is our subject right here. And this is in fact how I teach writing a sentence. Just start your sentence with a subject,and then everything else will fall into place.

But let’s see how it is constructed here.

The subject is “Man,” meaning human being. This is how they used to refer to human beings – just by calling them man up until the 19th century.

“Man, the most excellent and noble creature of the world, ‘the principal and mighty work of God, wonder of Nature,’ as Zoroaster calls him; audacis naturae miraculum [Nature’s boldest and most marvelous stroke], ‘the marvel of marvels, as Plato; ‘the abridgement and epitome of the world,”

Do you see what’s going on here? So far these are just little descriptions of what a man is, but we still haven’t seen the verb. The verb has not come yet. So let’s continue.

So, Man (these are all parenthetical expressions):

“sovereign lord of the earth, viceroy of the world, sole commander and governor of all the creatures in it,”

All of these are parenthetical expressions that refer to “Man,” which is the subject.

“To whose empire they are subject in particular, and yield obedience, (parenthetical expression), far surpassing all the rest, not in body only, but in soul (another parenthetical expression); Imagis Imago, created to God’s own image, to that immortal and incorporeal substance, with all the faculties and powers belonging unto it;”

And we’re done with all the parenthetical expressions. And now comes what? Now comes the verb.

“Man was at first pure, divine, perfect, happy, created after God in true holiness and righteousness; Deo congruens [fitted for divinity], free from all manner of infirmities, and put in Paradise, to know God, to praise and glorify Him, to do His will, Ut dis consimiles parturiat deos [that being like the gods he may beget gods](as on old poet saith) to propagate the Church.”

That was a mouthful. Just one sentence.

Now, look how many parenthetical expressions come between the subject and the verb.

Again, the lesson is that a sentence must have a subject and verb. The subject “man” and the verb “was” make it a complete sentence.

In fact, if I only say “that man was,” or “Man was,” that would be a complete sentence.

Lesson 2: The subject and the verb must agree in number.

Now, do they agree in number?

Man – was. Absolutely. They do.

Lesson 3: These rules apply no matter how many parenthetical expressions you have.

Like I said, there are many parenthetical expressions here. And we’re talking, by my count, thirteen.

So here are your takeaways:

The Power of Dualities – a Great Way to Organize Ideas 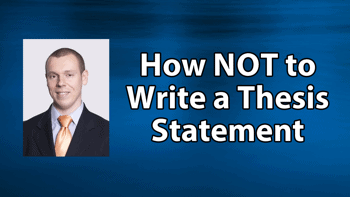